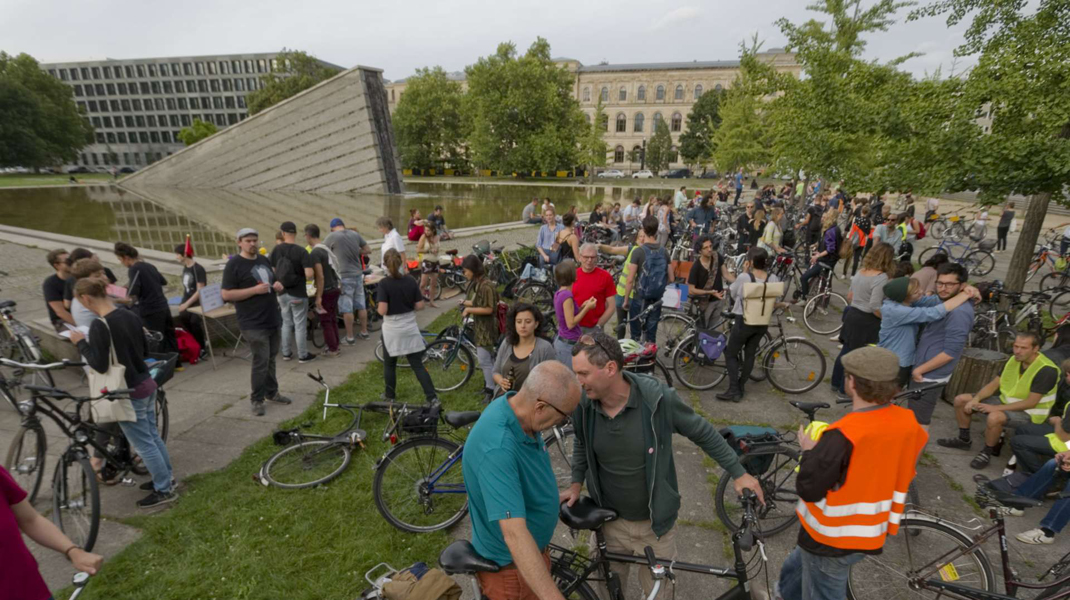 Here is the Art Spin Berlin 2016 recap!
On Friday August 5, 2016, 450 cyclists mobilized for Art Spin Berlin‘s third annual tour. This year’s 14 km ride through Wedding and Moabit included 6 locations, 11 projects. It was made possible by our core team of organizers and volunteers, a friendly and efficient police escort, the financial support of the Bauhaus-Universität Weimar, Quartiermeister and your donations!

Here is a summary of what you experienced (the Art Spin Berlin 2016 recap):
(Photos courtesy of Orange ‘Ear and Iva Kirova)

The skies cleared just before 6 pm and while our cyclists gathered, Klara Geist set the tone for the evening with their always-perfect playlist. 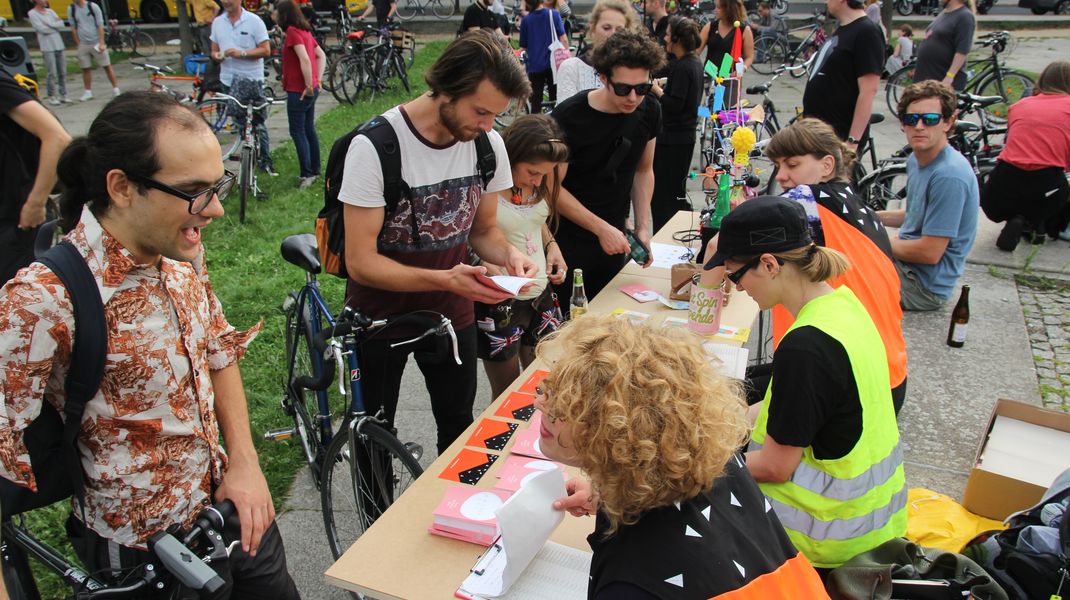 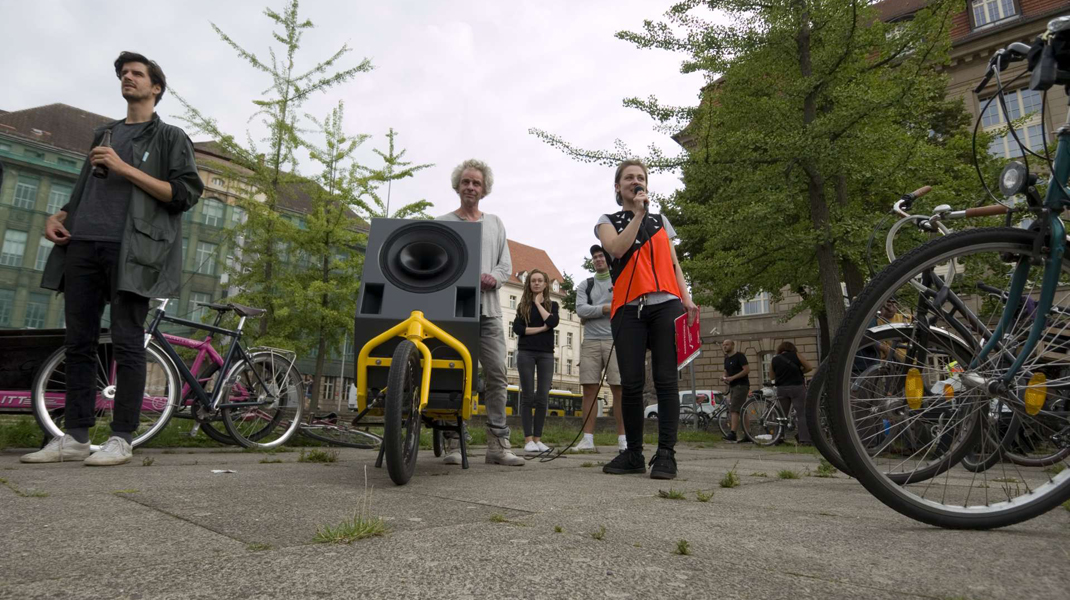 Invalidenpark also hosted our first two projects: Berlin Bicycle Bell Orchestra by Lena Skrabs and Paloma Sanchez Palencia and From A to B: Learning the Act of Balancing by Daphna Westerman. Sasha Tatic‘s work Bike Hiker – which continued over the course of the tour – also began as she searched for participants to hitch a ride with from stop to stop. 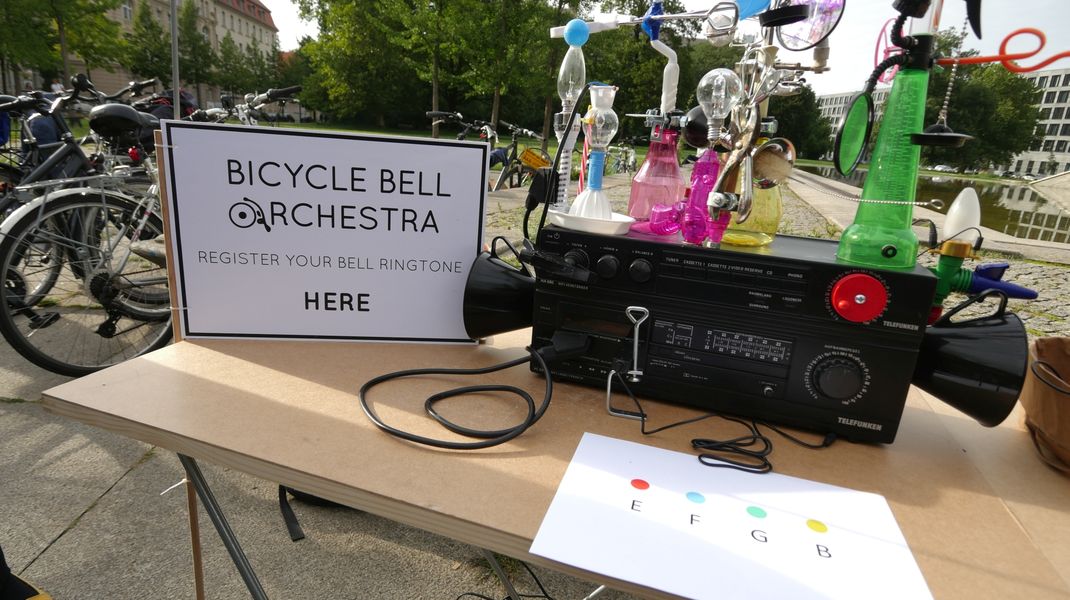 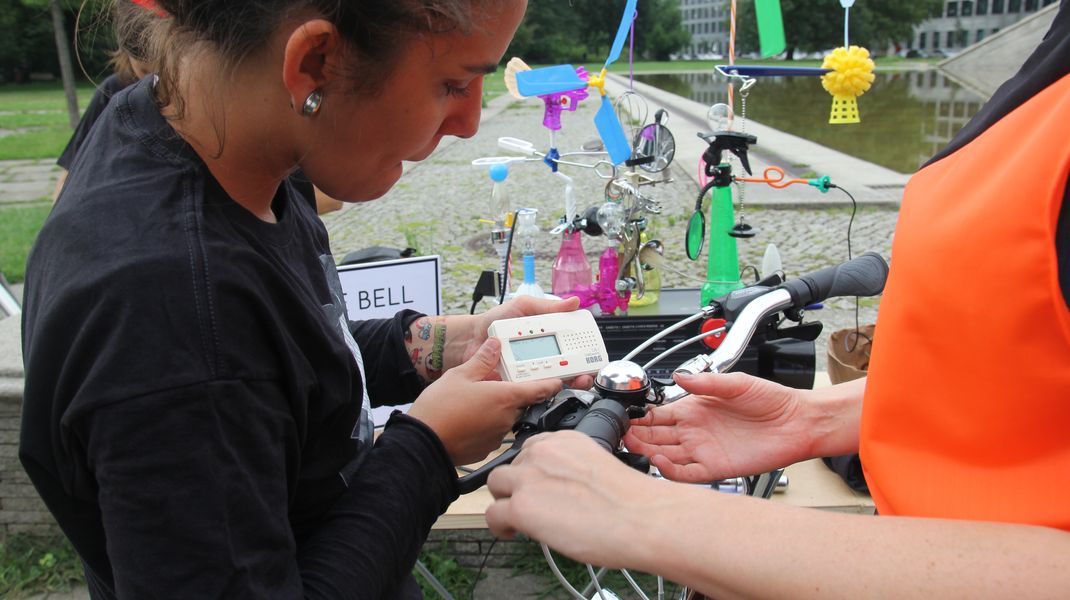 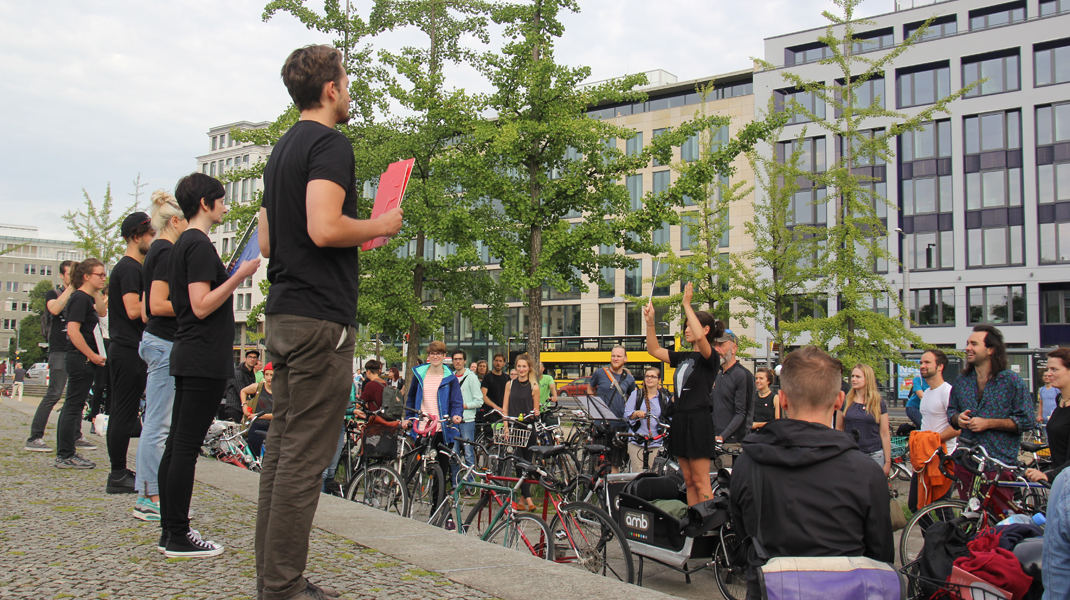 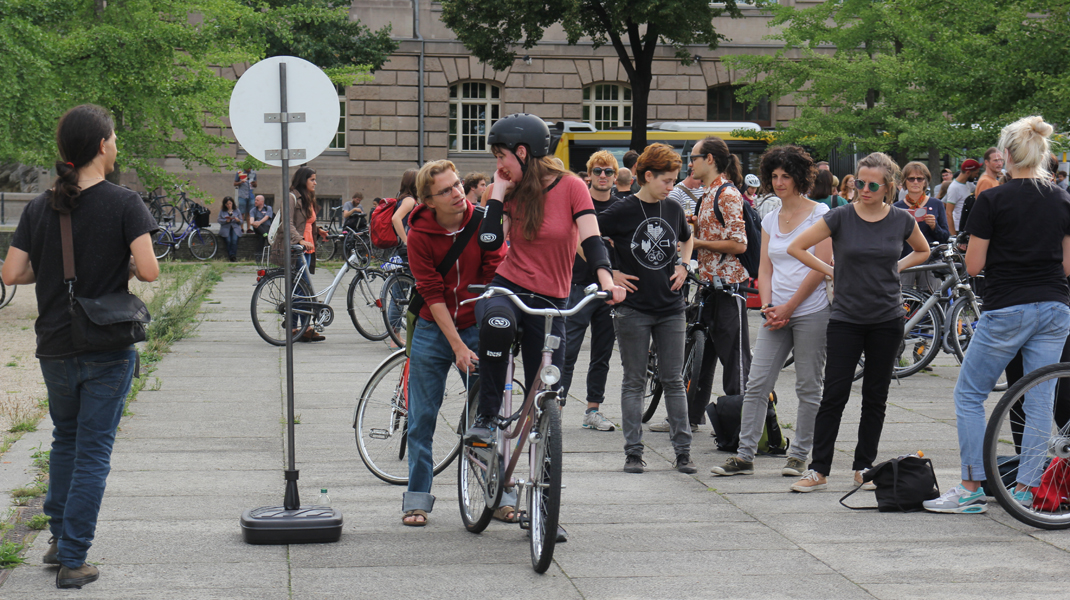 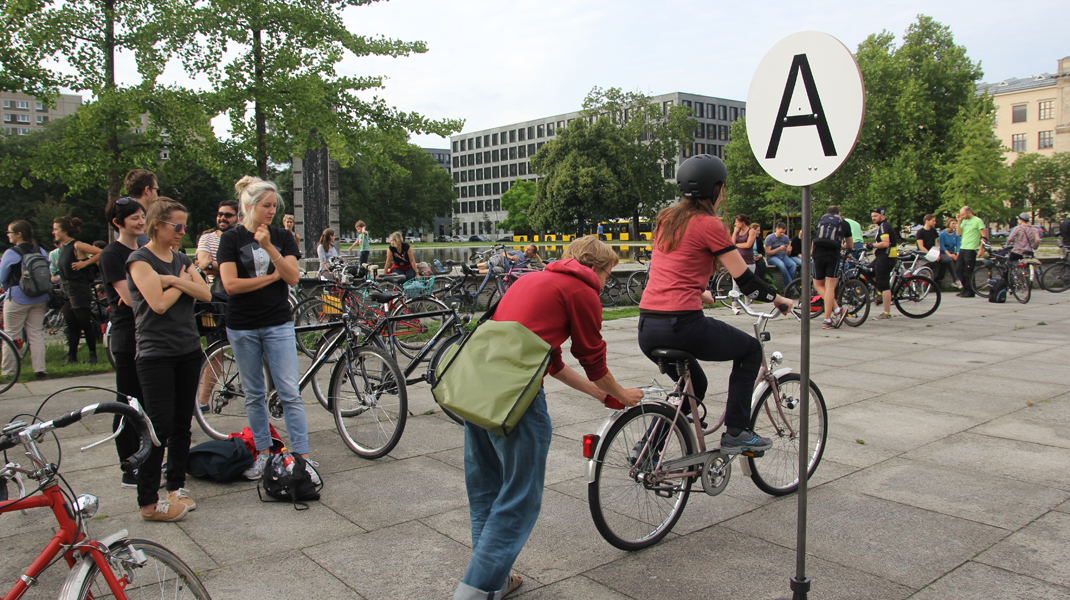 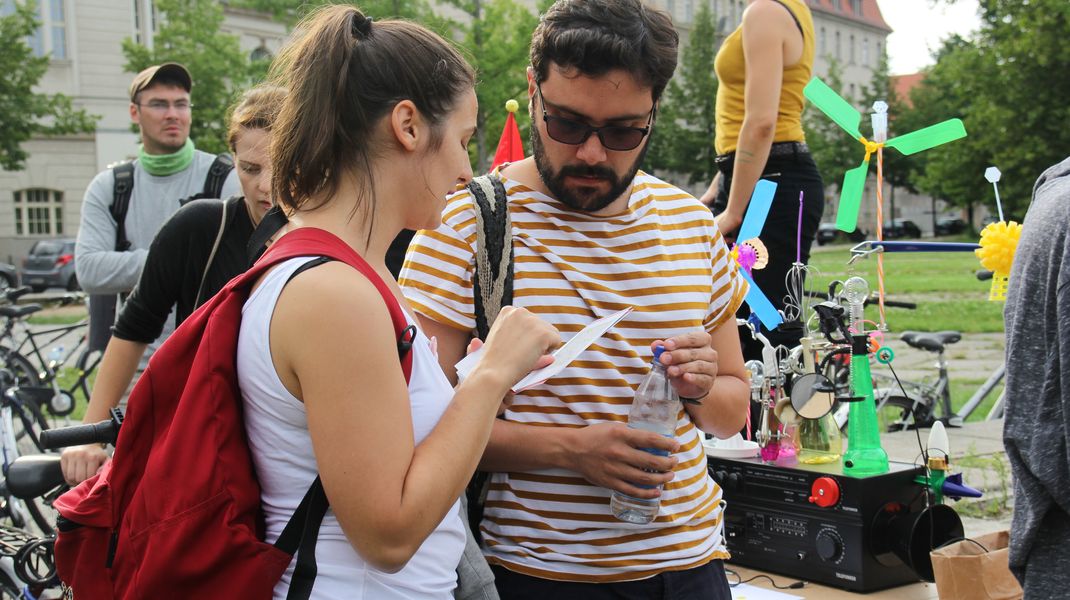 Our first stop was to the exhibition THE INCANATION OF THE DISQUIETING MUSE at  SAVVY Contemporary, located at Silent Green, a creative venue in the historic premises of the former Wedding Crematorium. The exhibition, which looks beyond western misconceptions of the supranatural and ‘witchery’, reflects Wedding’s cultural diversity. 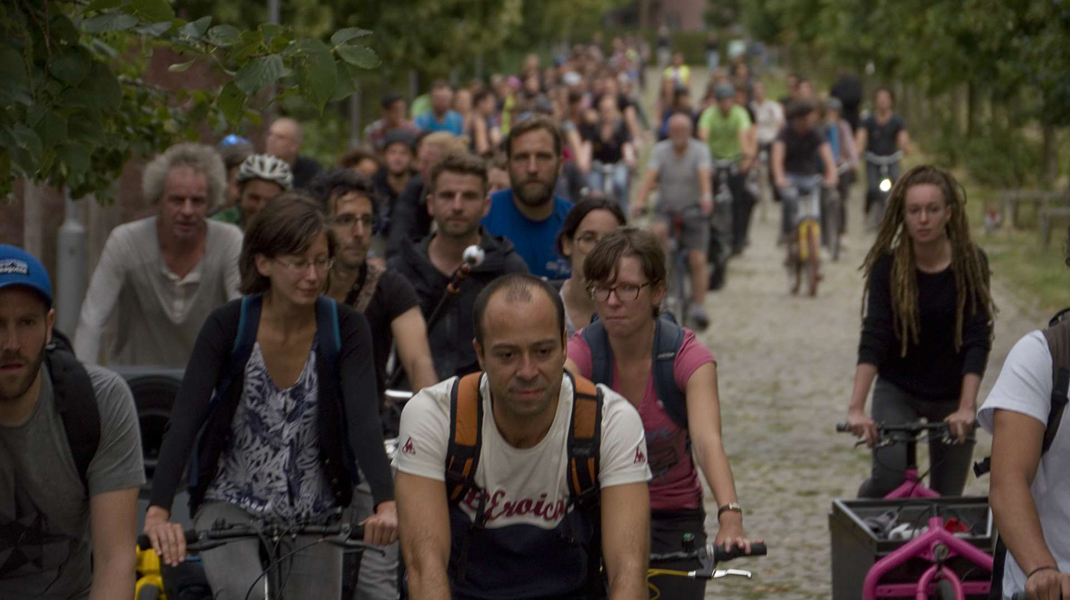 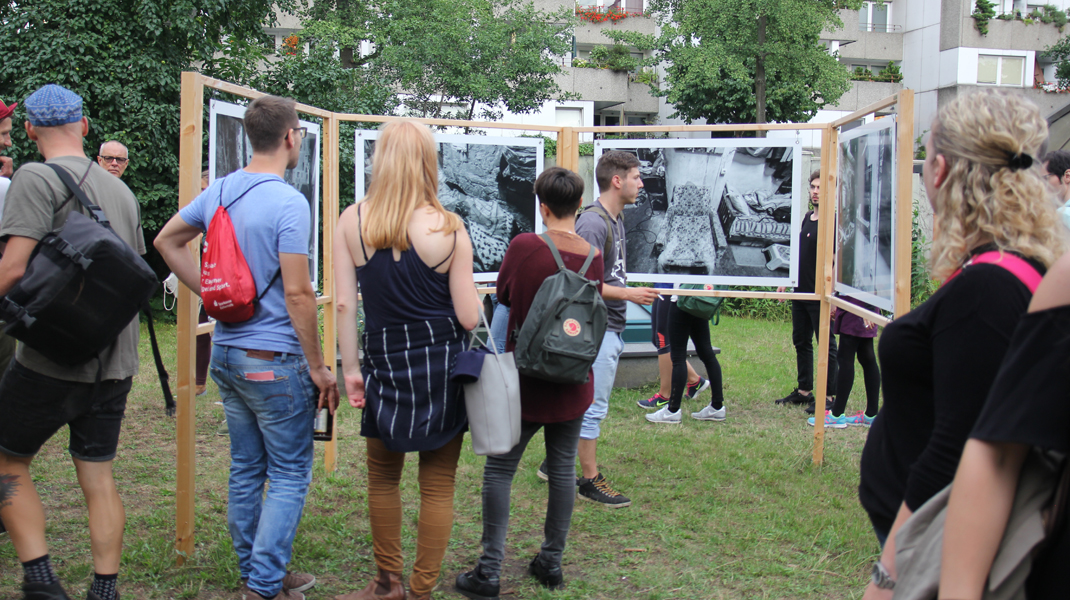 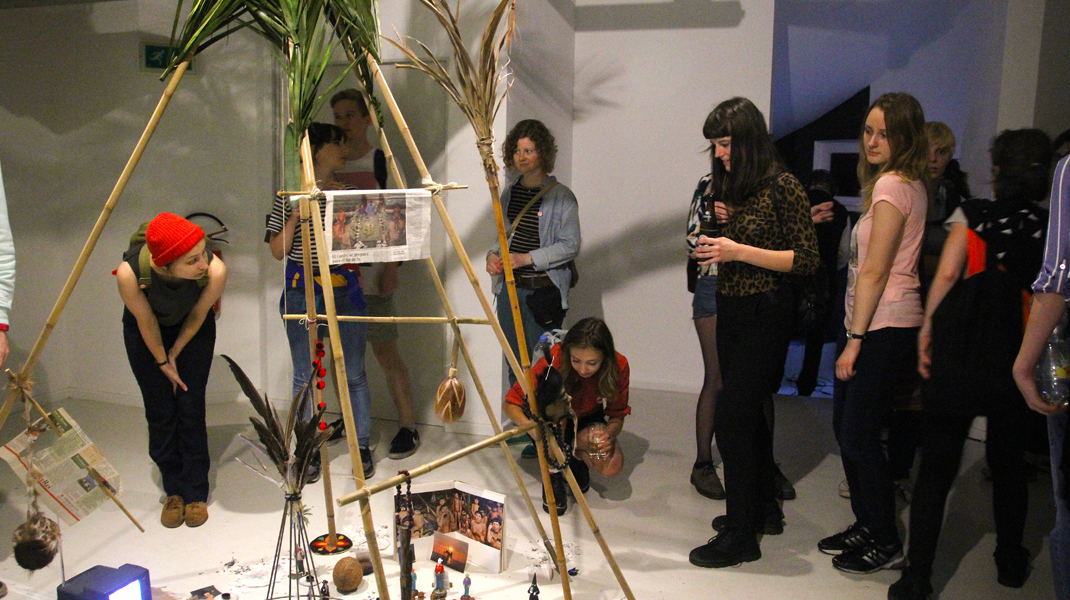 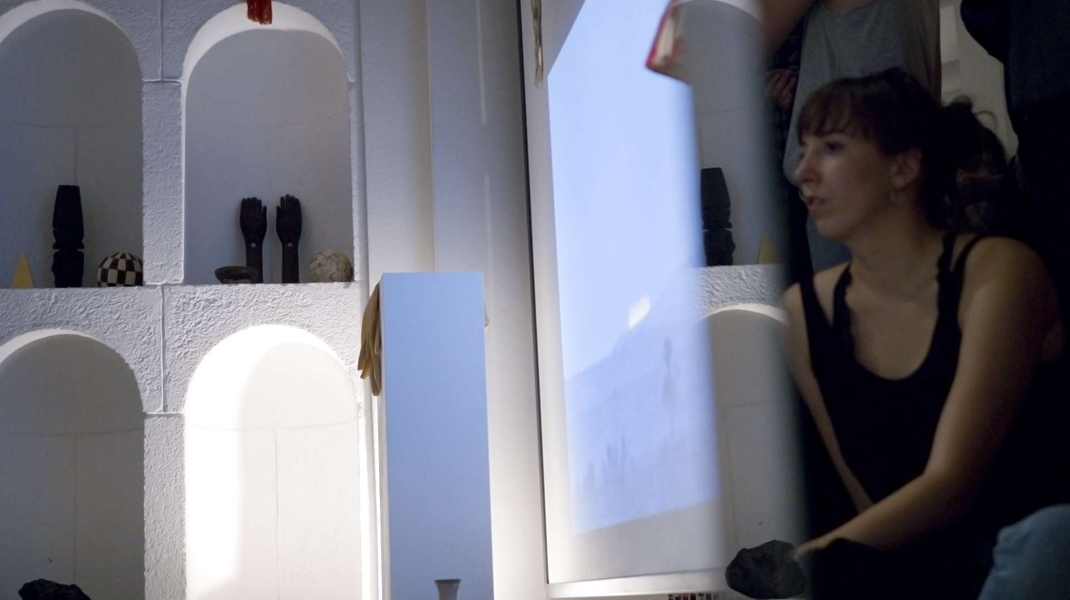 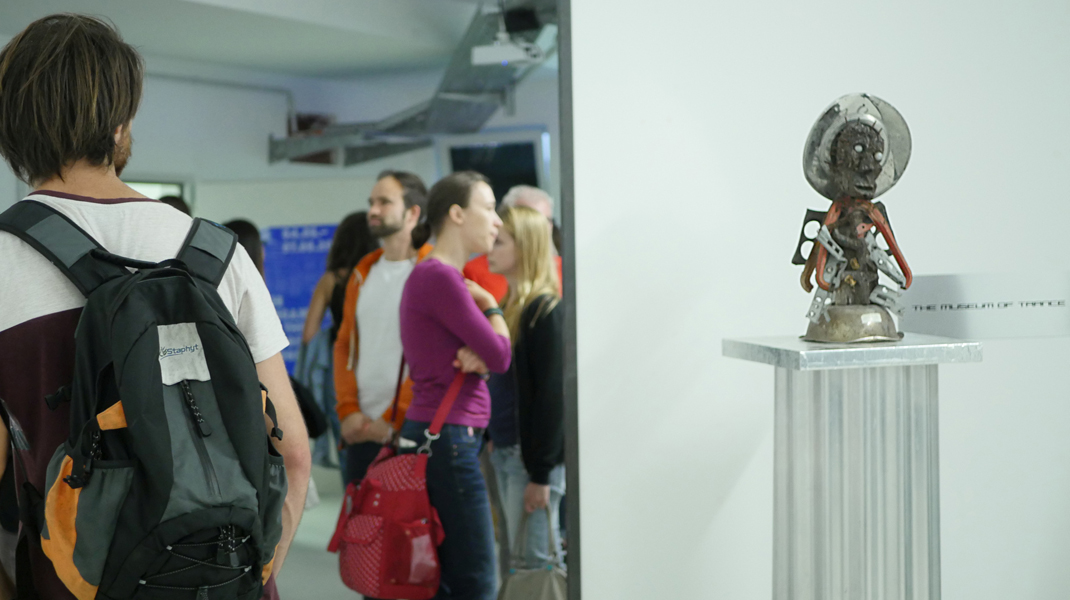 Our next stop was PANKE Culture, a creative multi-purpose space in Wedding, run by a collective of creative people. Its main aim is to promote experimental/fringe creativity in Berlin. We found it fitting to feature two experimental performances at this stop: Claire Waffel and Pere Ferrera Bertran‘s Flow Instabilities inside of PANKE, and Andyvazul‘s Disharmonika in the courtyard. The performances were looped, which allowed participants to explore the industrial exterior of the former Siemens factory as well as the impressive, alternative interior at their leisure. 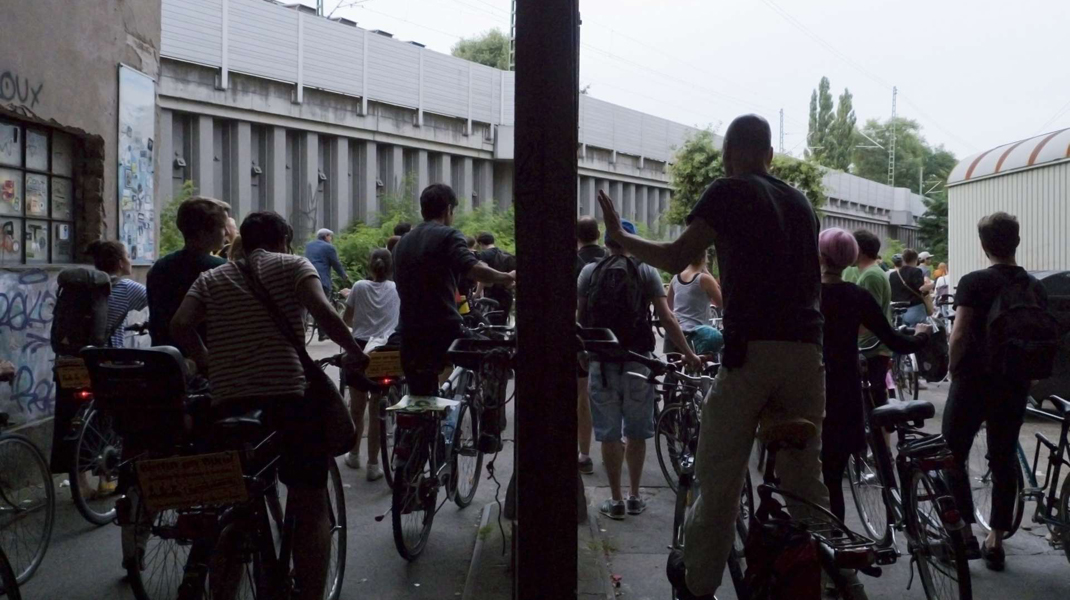 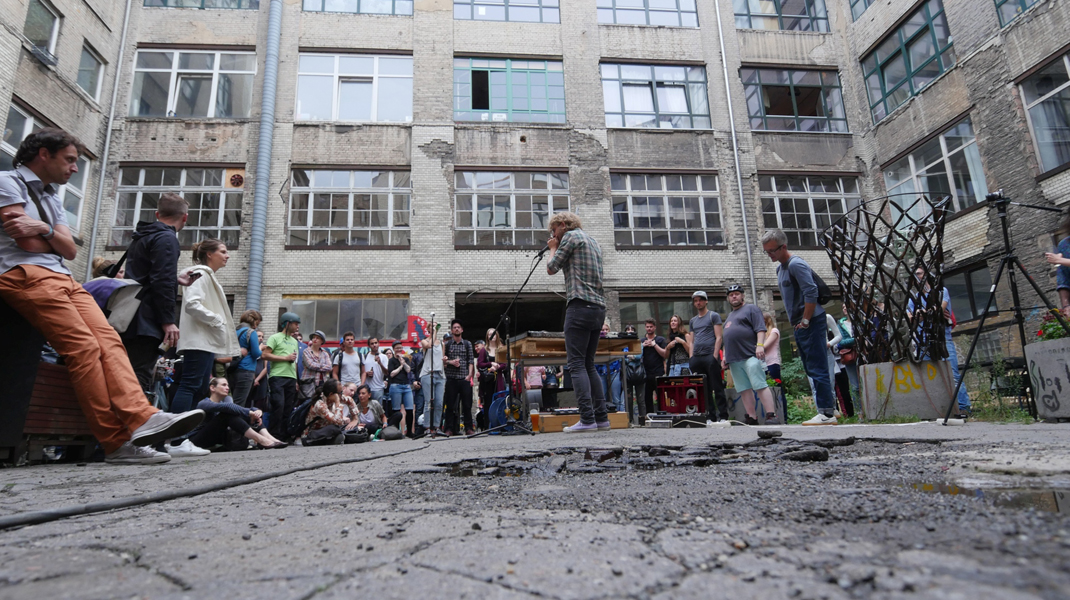 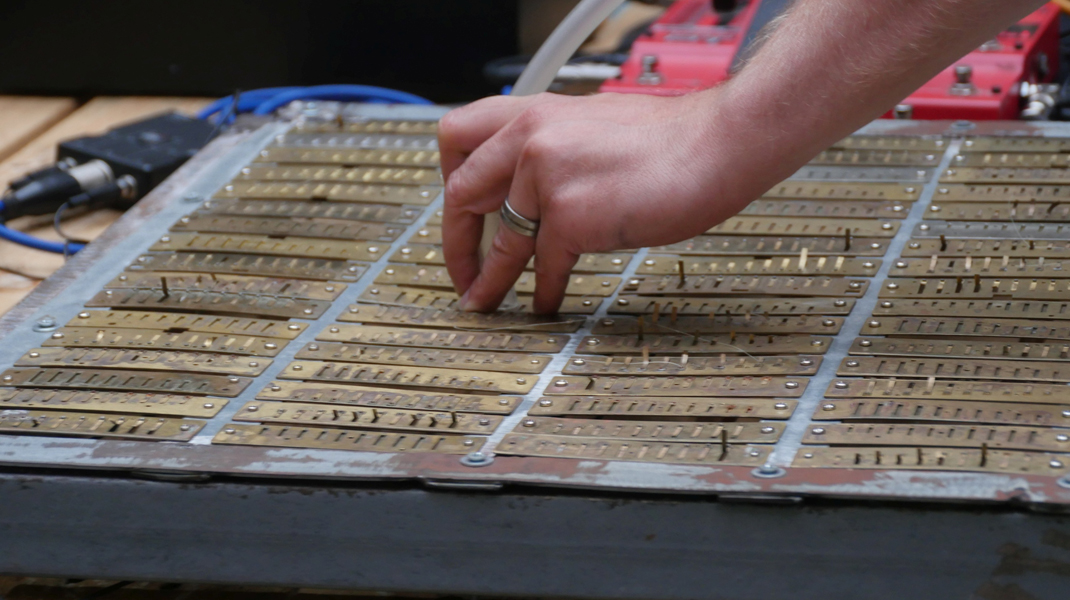 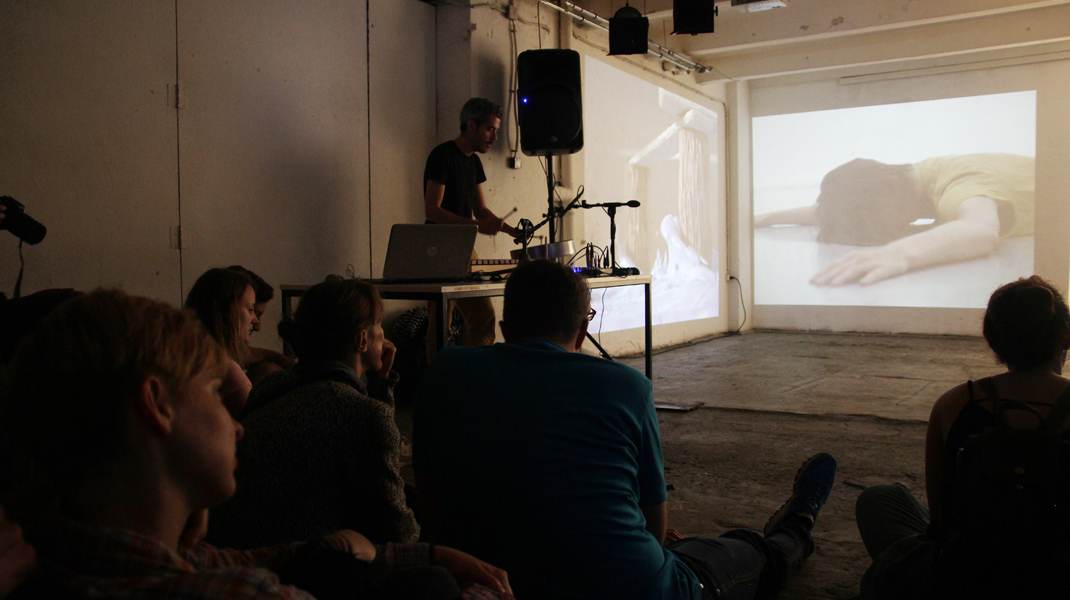 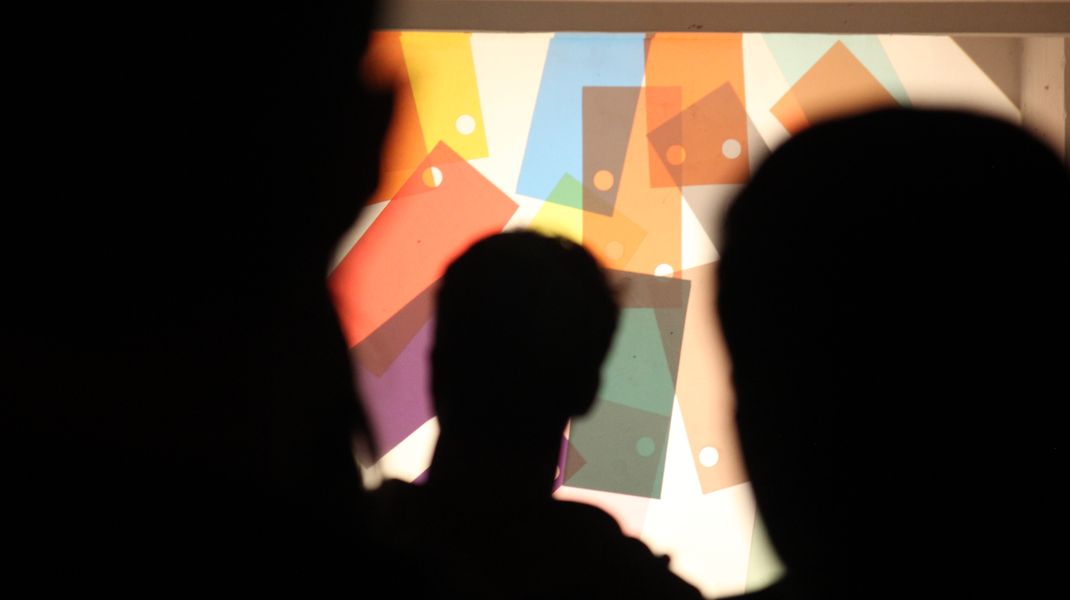 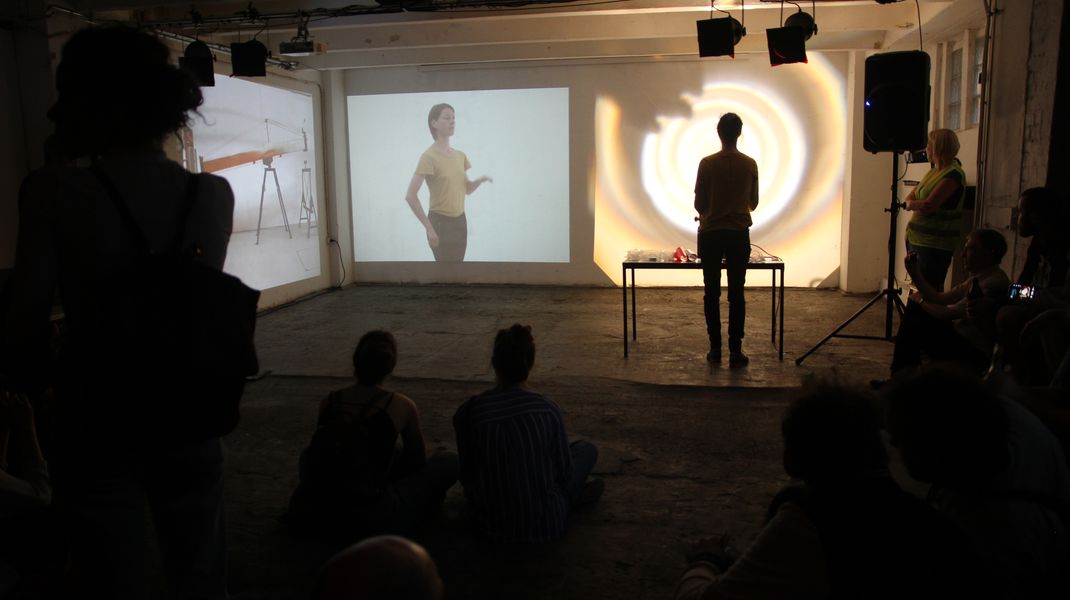 Our next stop was the Volkspark Rehberge in the heart of Wedding’s African quarter. Prior to World War I, Carl Hagenbeck planned the creation of a human zoo at the park, a project that would put people from Germany’s African and other overseas colonies on display. Jamaican artist Zwoisy Mears-Clarke ironically put himself on display at the site during his performance How to Greet Like a Jamaican: Step 2. Mears-Clarke’s work is based on migratory experiences focusing on the translation of untold stories from Afro-Diaspora perspectives. 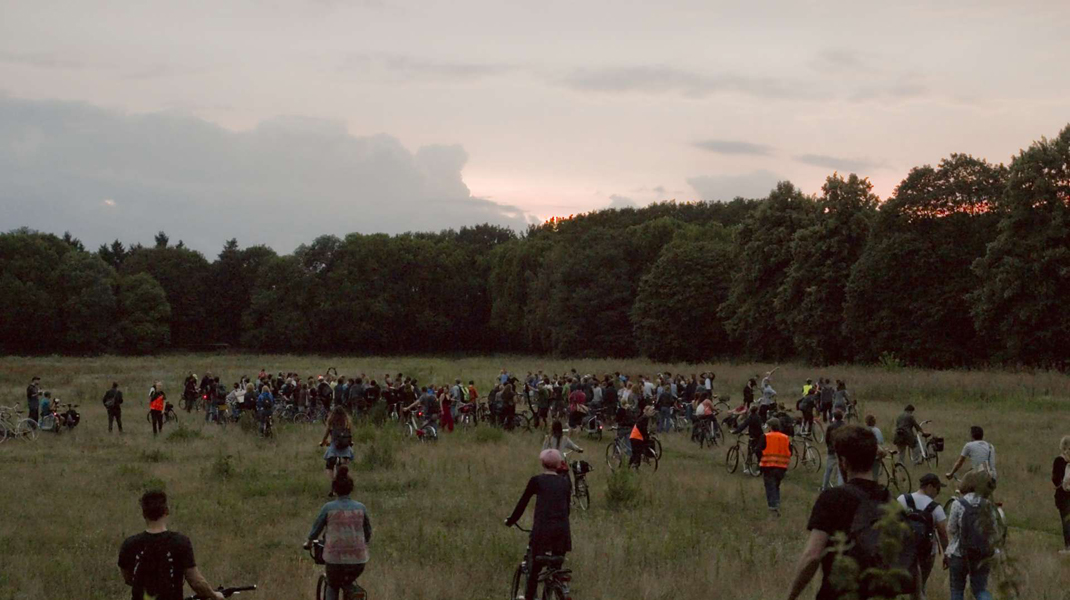 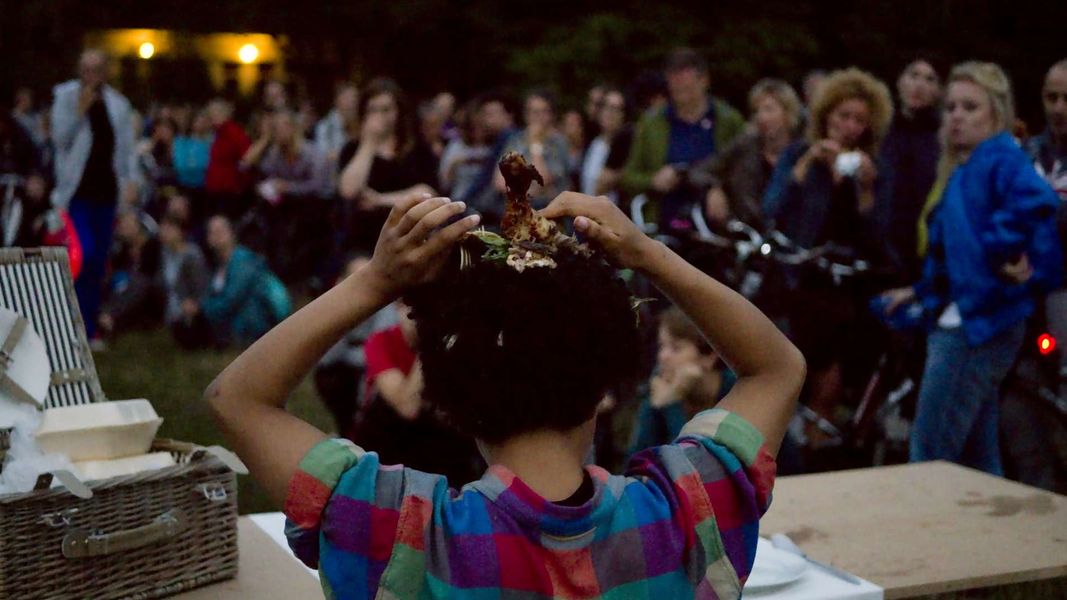 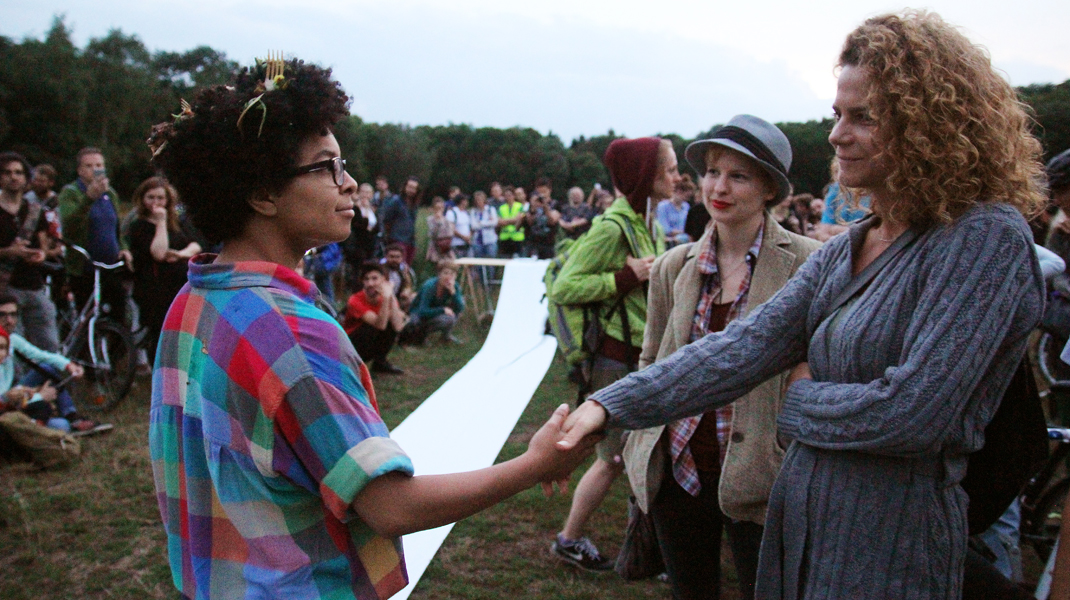 Spaces such as the Jugendverkehrsschule Moabit have an uncertain future due to the increasing property values in Berlin and the city’s desire to put what is best for the economy before what benefits the community. While the group Freunde der Jugendverkehrsschule Moabit e. V. have great ideas for the future of the youth cycling school, they are fighting against plans to use the land to build new apartments. It was rather fitting, then, that the car-driving, money-throwing, bling-flashing Kröten-Gang (Kröten is German for toad – and is also slang for money) told us our worries and anxieties are all capitalism’s fault. The performance Kröten ohne Furcht by the interdisiplinary artist collective Hannsjana included ‘Fear Therapy’ for our cyclists followed by a  performance spectacle serenading themes of ecology, the economy, and feminism. 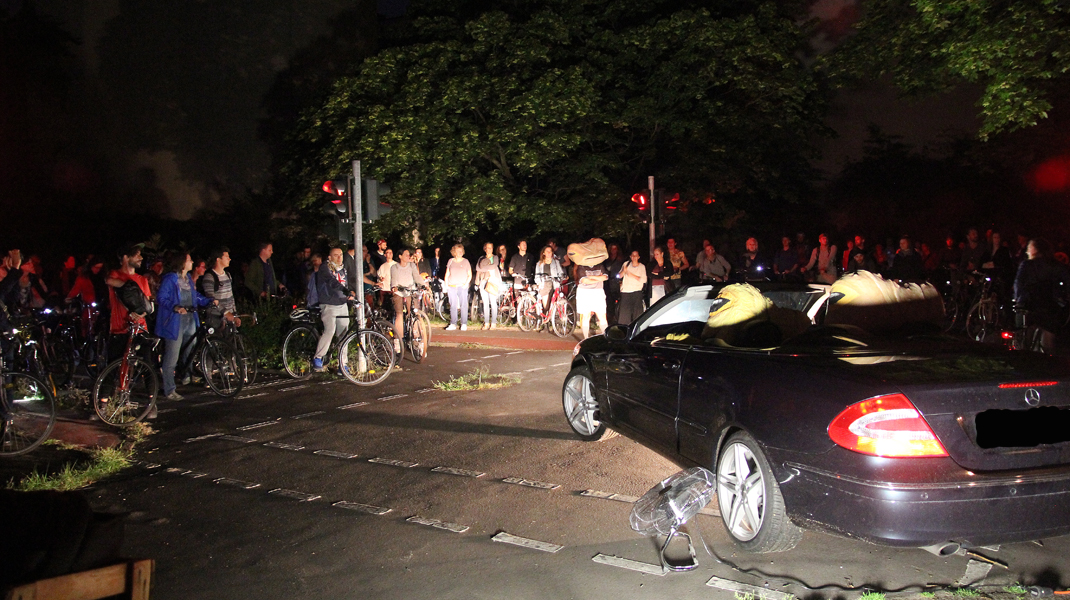 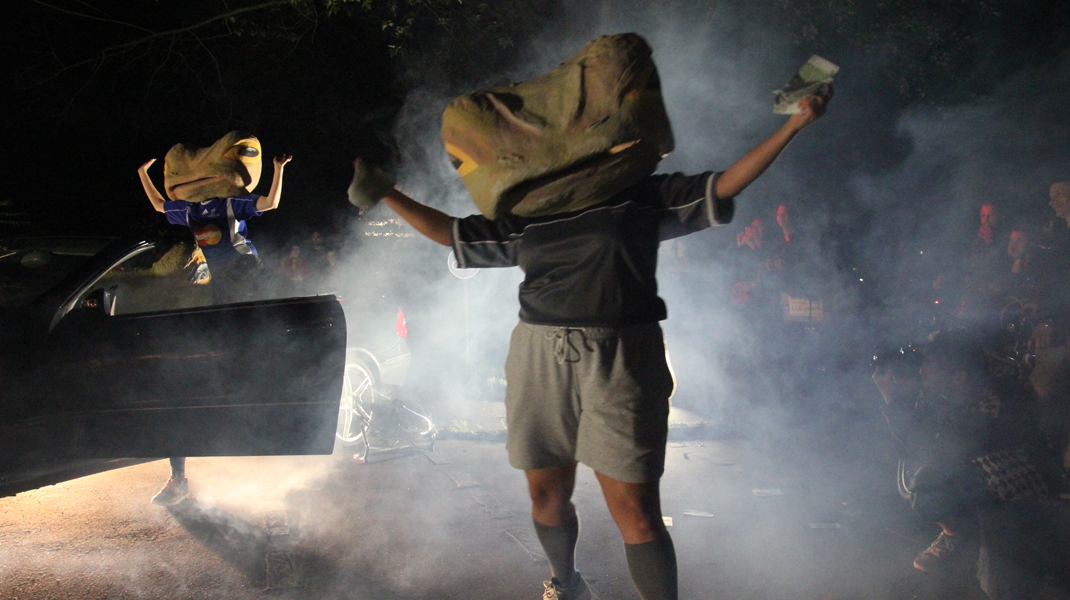 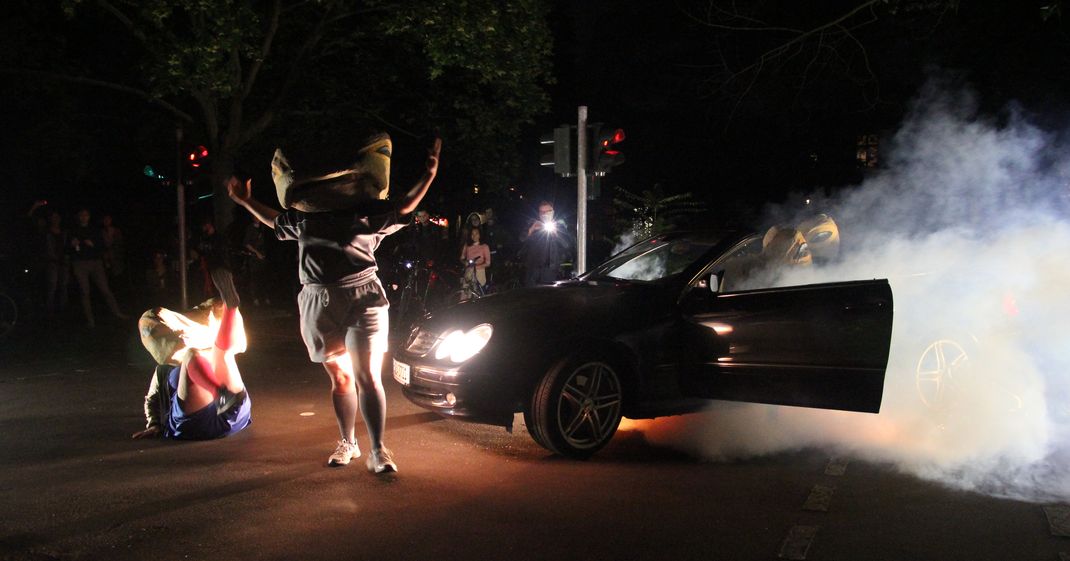 Our last stop took place at the ZK/U, a laboratory for inter- and trans- disciplinary activities centered on the phenomenon of “the city”.  After the long ride it was nice to sit down and relax with a collaborative short film program hosted by Speisekino Moabit and curated by Mobile Kino. The film program featured shorts about cycling, mobility and food. 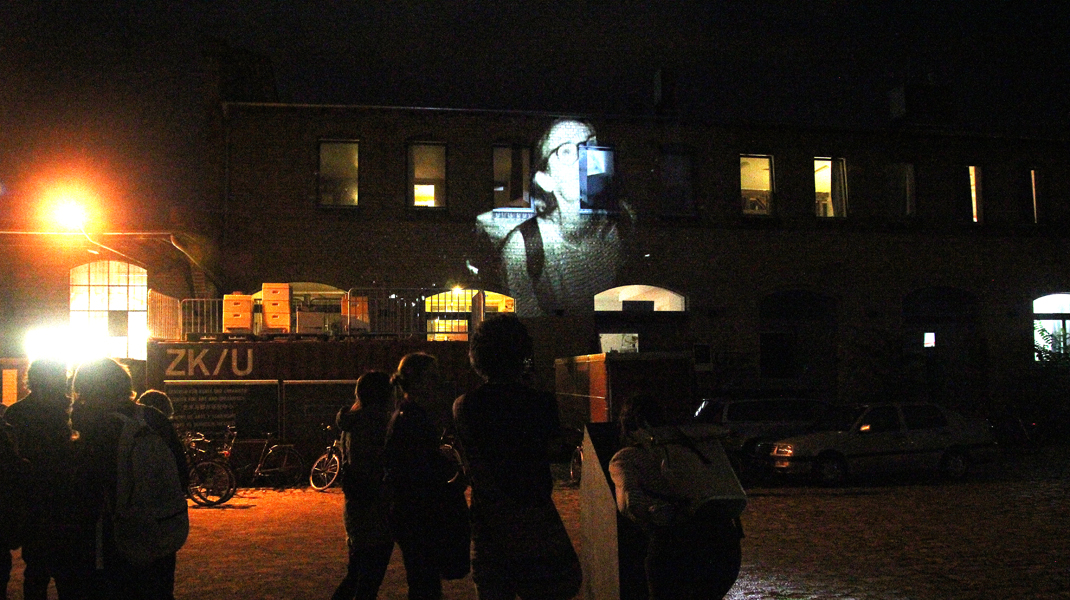 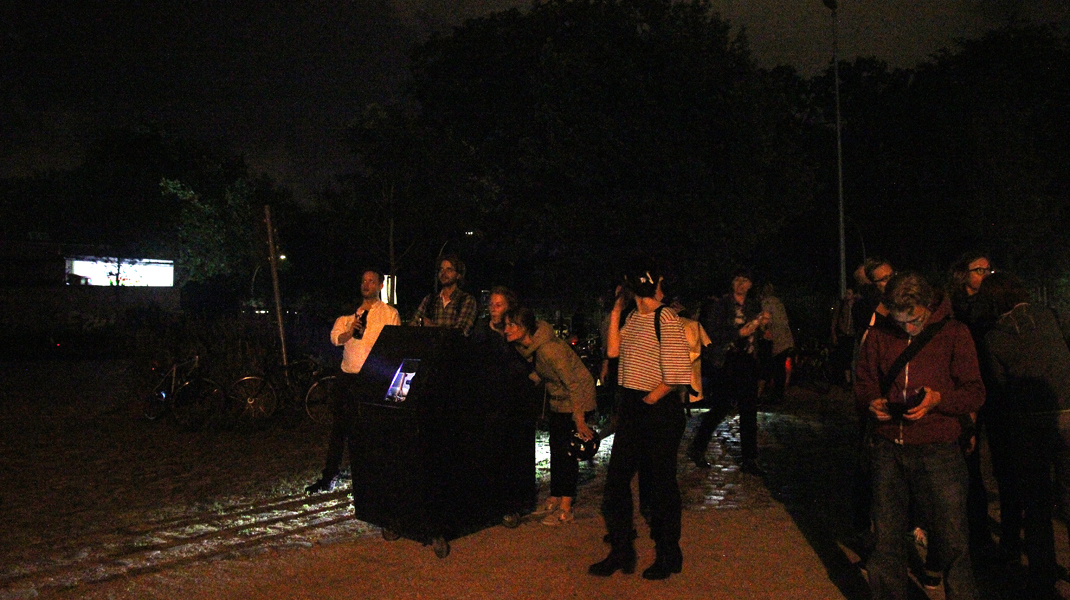 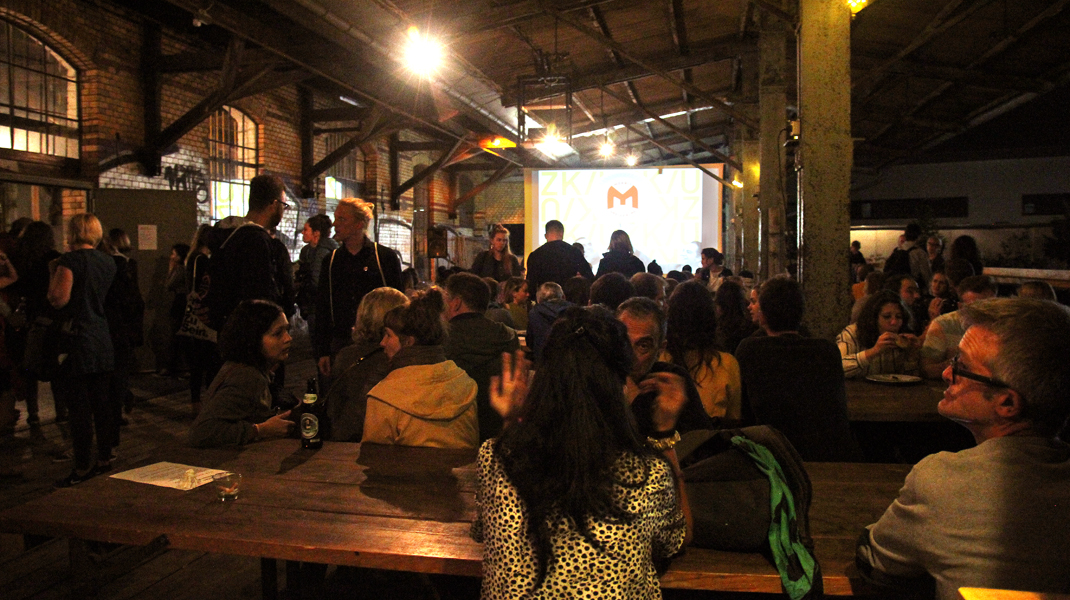 Upon arrival at the ZK/U and throughout the rest of the evening, participants could interact with Kopfkino, a playful project by architecture collective ON/OFF, which amplifies live actions with a camera and projects them enlarged onto its surroundings. The en route project Wege Gehen/Going Well by Marjorie & Lisa font de l’art featured its final of five scenes which took place rather subtly along the ride.

Art Spin Berlin 2016 was coordinated and curated by Vanessa Brazeau, Iva Kirova, Léna Szirmay-Kalos and Florian Zeller. We couldn’t have done it without the unbelievable support of the bike and art community, our friends, and the enthusiasm of all cyclists that took part – you all create a welcoming, positive, open-minded  atmosphere on our tour! Therefore, a special thanks to everyone who volunteered their time to assist us and a special thanks to the following organizations:

Thank you for your support (and reading the Art Spin Berlin 2016 recap)!