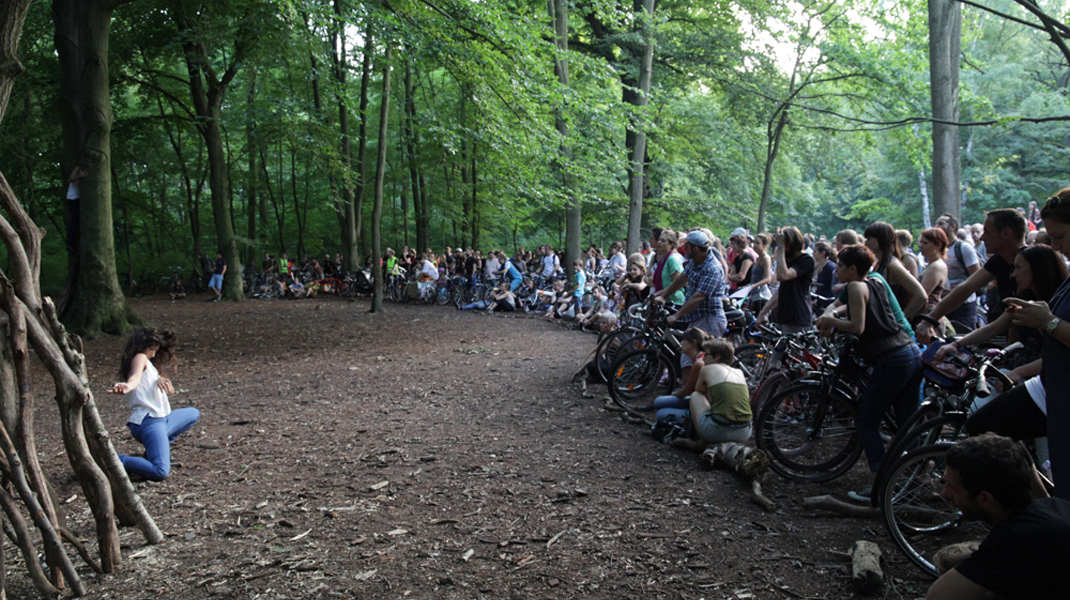 Art Spin Berlin 2015 was already some time ago, and now that summer is just around the corner it’s time to reflect last years tour and start thinking about summer 2016. Here’s our Art Spin Berlin 2015 recap with photos by Orange ‘Ear and Jonny Whitlam.

It was hard to miss our meeting point in Treptower Park on July 24, 2015 due to the unbelievably powerful sound coming out of the speakers of Klara Geist’s sound bike. From beginning to end of the tour Klara Geist’s set, compiled specifically for Art Spin Berlin 2015, it was the perfect atmosphere for a warm, laid back summer evening of bikes, art and Berlin.

While we waited for roughly 350 cyclists to arrive, artist Paloma Sanchez Palencia (BR) kept everyone busy with her bike flag-making workshop. Participants decorated and constructed the flags designed by Sanchez for their bikes. The project set the creative, colorful vibes that bled out into the rest of the evening. 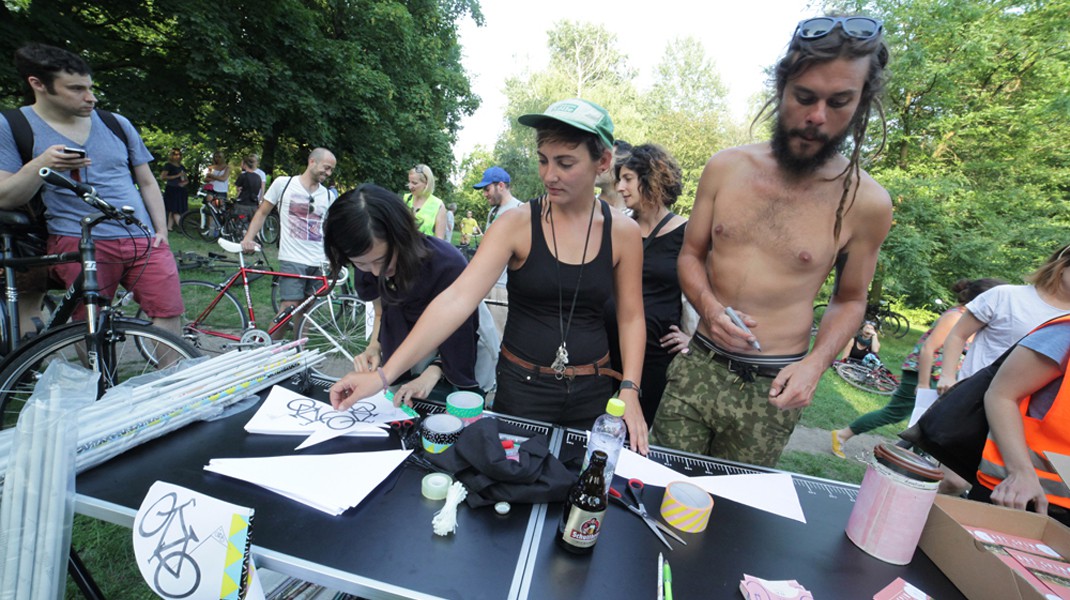 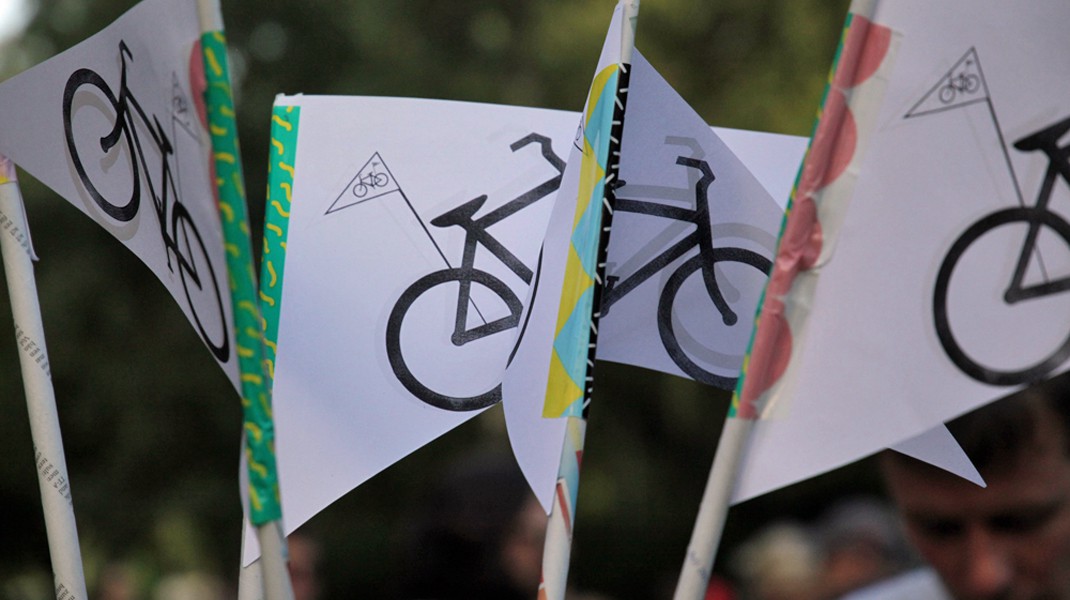 At our meeting point, cyclists may have met artist Stefan Klein (DE), who was handing out business cards before the tour began. When we started pedaling, Klein began a ride of his own, created by you.  His route was determined by the commands he received from  participants when they called the number written on the business card. “Turn left”, “take your next right” – Klein took your advice. This interactive performance titled Bread Crumbs Will Lead You Home was recorded using GPS and his final route – with your recommendations – can be seen here. 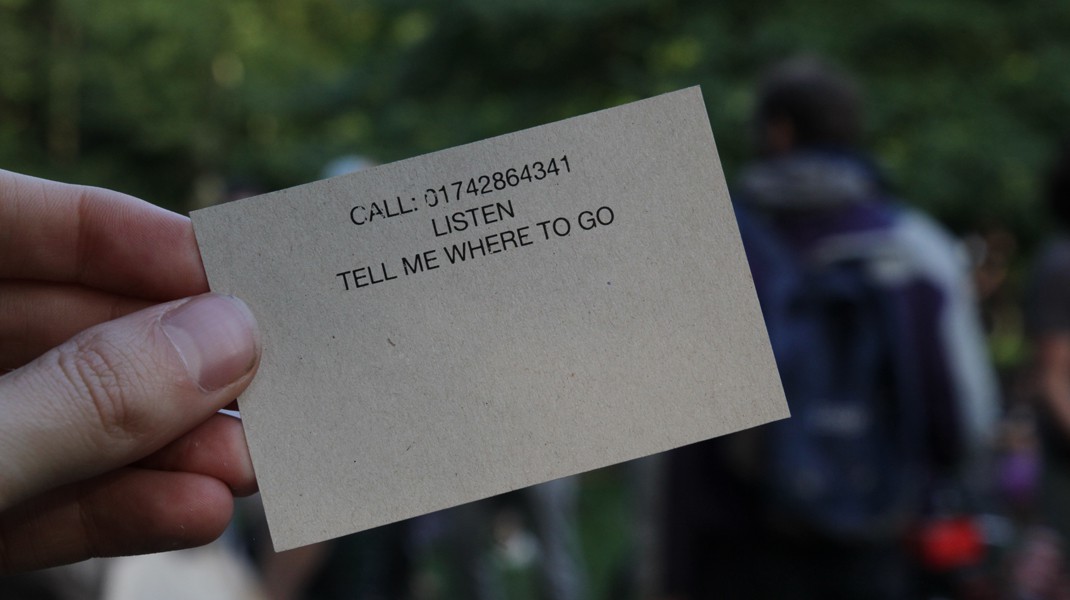 At 19:00 beat-boxer das Friedel (DE) kicked off the tour with his talented vocals. Performers from so sick communications particularly enjoyed his beats as they motivated us for the 10 km bike ride, dressed as tribe-like cheerleaders, popping up-along the route with unsettling obedience and pep.

From Treptower Park we headed deep into Plänterwald

Our second stop, a contemporary dance performed in silence. Tigers in Trees – Impro n°1 by Francesca Penzo (IT) with Jacques Andrè Dupont (FR) and Lina Gomez (CO) – chose to leave out the music and intuitively follow nature’s rhythm. There are few places in a city where one can hear nothing but trees blowing in the wind – and even less often to experience it accompanied by the passionate movements of three professional dancers. 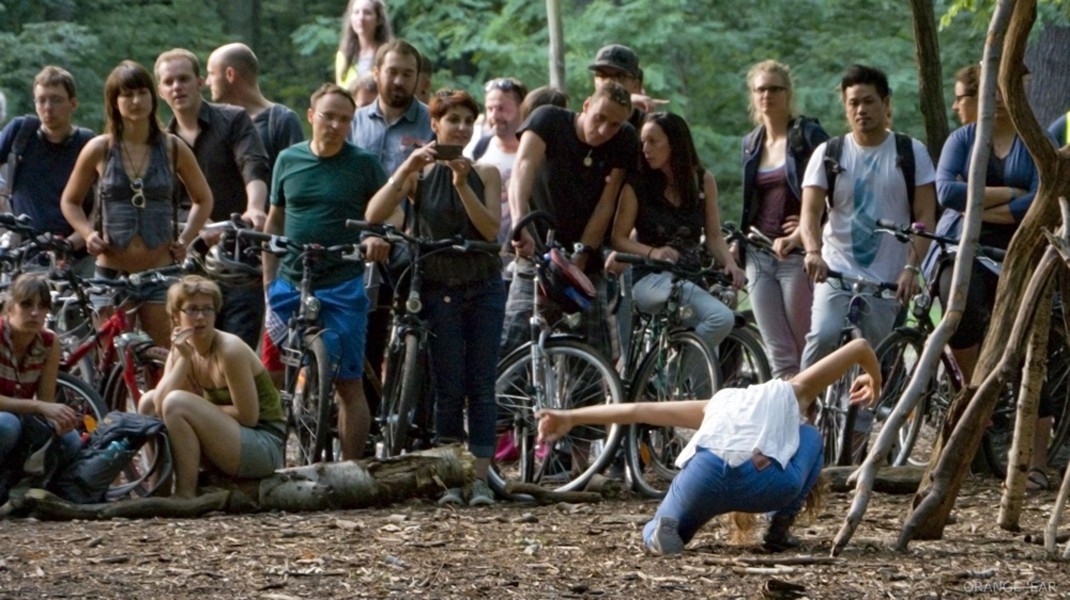 Our third stop was a harsh but welcomed contrast to Plänterwald. As we crossed the bridge to reach Platz am Kaisersteg, we were welcomed by an opera performance by Holden Madagame (US) & Emma Rothmann (UK). Our longer stop in Oberschöneweide included several parts to be explored, co-curated by Emily Perry (UK) – an installation by Lukas Adolphi (DE), chalk paint by Vivian Chan (CA), a visit to the G11 Gallery’s exhibition LANDSCAPE – METROPOLIS curated by John Power, and simply enjoying the square directly on the Spree.

Before leaving for the final stop on our tour, we gathered around a historic integrated crane-way and with the sun setting behind us, Bronwen Pattison (NZ) engaged us in a beautiful silk performance. The rough, industrial metal contrasting the bright red silks and organic form of the human body was an unforgettable and perhaps the most powerful image of the tour. 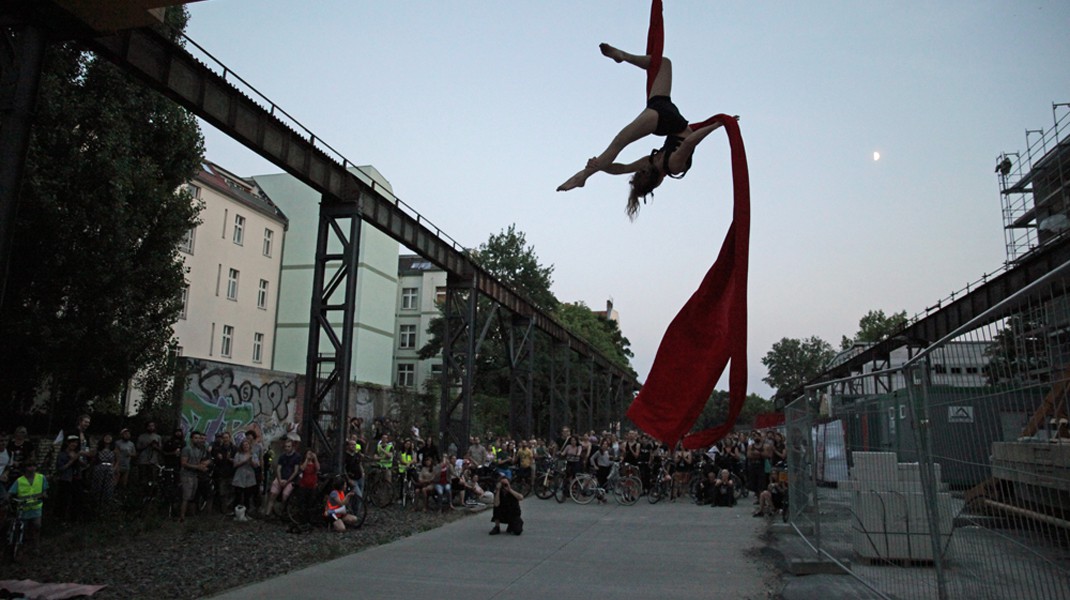 En route to the last stop, we colored the streets of Oberschöneweide with Vivian Chan’s chalk paint project and ended at Rummelsburg-Berlin. We were greeted at our final location by Graffiti Research Lab Berlin, who had participants painting individual laser-graffiti images on the side of an old factory building. The evening ended with more music from Klara Geist as well as sound/visuals from Liquid Sky Berlin.

Now that you’ve been reminded of all the fun we had last year, we’re really excited to let you know we’re planning a whole new experience for you again this summer on Friday August 5, 2016! Stay tuned for details about our open call and other updates.